SK Innovation successfully ran “EnviRun for the Earth” (EnviRun in short) Plogging Week from April 18 to 29 for in and outside of Korea as part of the company’s plogging campaign started last year. During the EnviRun Plogging Week, 4,045 employees of SK Innovation and affiliates participated, recording total 7,657 hours of volunteering. Furthermore, SK Innovation aims to scale up the number of participants in Korea including those who are not its employees to 300,000 citizens, which is nearly twice as much as the number of last year (about 160,000 people). Let’s take a look at how SK Innovation members as well as the partner companies, local communities and organizations across the globe joined the EnviRun Plogging Week 2022. 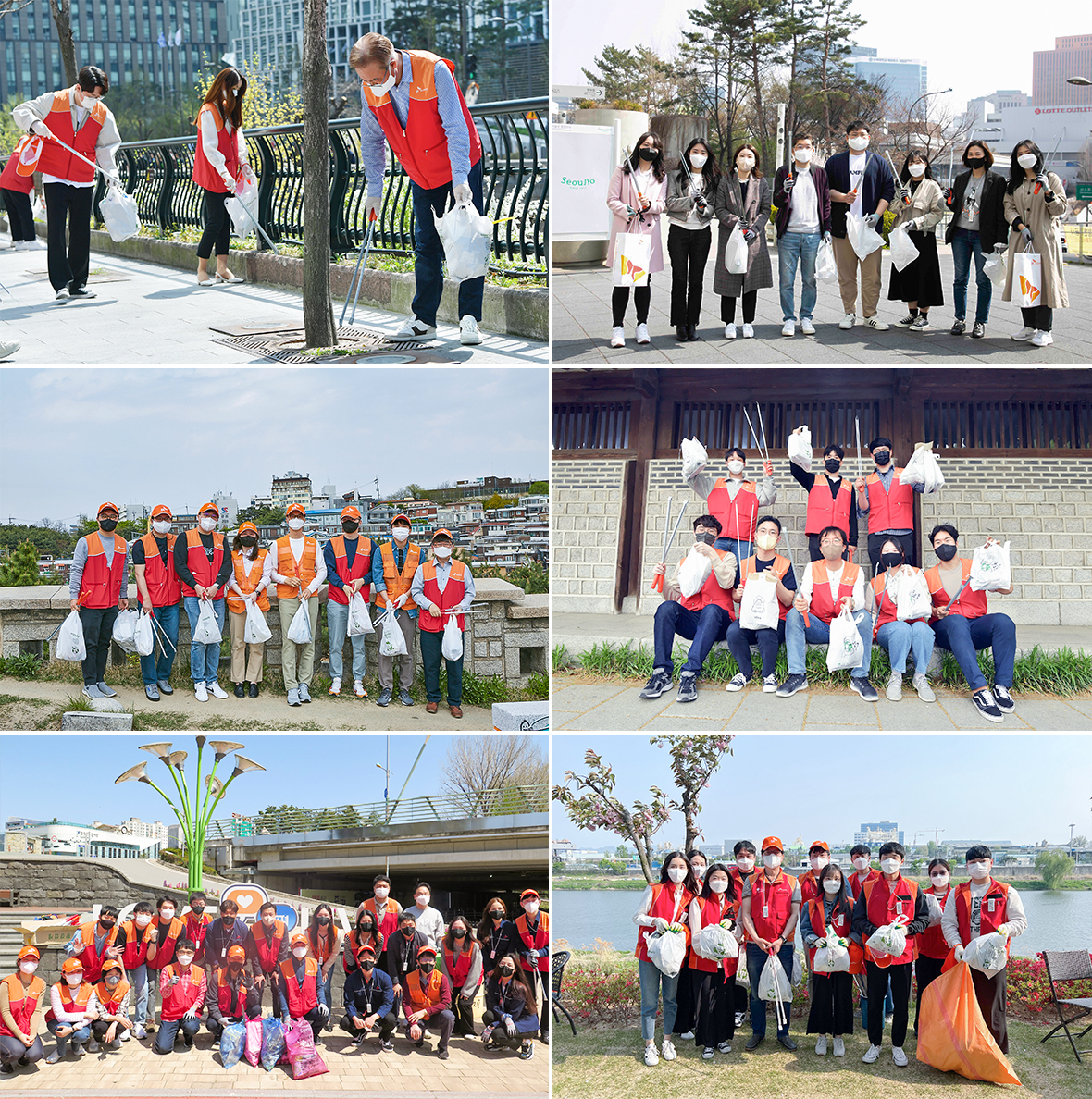 On April 6, Na Kyung-soo, CEO of SK Geo Centric, also participated in the plogging activity with new members of the company around the areas of Seoul Station and Namdaemun Market. On that day, CEO Na also shared SK Geo Centric’s eco-friendly business and business prospects with the members while plogging.

This is the second year Korean employees took part in the campaign, but they all actively joined the activity this year as well. Aside from small groups of co-workers, SK Innovation members also participated in EnviRun Plogging Week with their families, friends, and even their companion animals.

In SK Earthon Shenzhen (SKEO Shenzhen), every member of the corporation actively engaged in the plogging campaign, noting that “they will make sure that this plogging week is not a one-time campaign, but will be a starting point of a continuous ESG project.”

SK Energy International Singapore (SKEI Singapore), SK On Hungary (SKOH) and SK Battery Manufacturing (SKBM) also joined plogging event by plogging along the local river and parks. The global members who have participated left several comments on the plogging activities. Stacey Koh, a member of SKEI, said “it’s very fulfilling and heart-warming to see everyone’s commitment to restore our Earth!”, and Kevin Wong, a member of SKEI added “we will gladly continue to participate in the activities that can connect to the nature and people”, showing strong will for the continuous project. All plogging activities operated by SK Innovation and its affliates/subsidies followed the local COVID-19 guide lines.

03 | Expanding beyond the company’s program into a nationwide campaign

In addtion, SK Innovation signed an agreement with the Korea Coast Guard to make EnviRun bevome a Korean national-wide campain, following the running of the campaign with the Korea Volunteer Center and Korea Road Traffic Authority last year. The business agreement of four agencies signed on April 28 at the headquarters of the Korea Coast Guard was to cooperate and act together to bring changes in perception toward eco-friendliness and behaviors of Korean citizens. They are planning to expand the campaign by utilizing the network and infrastructure of respective agencies.

On that day, Choi Yun-seok, CEO of SK Incheon Petrochem, who was at the agreement ceremony on behalf of SK Innovation, and about 60 representatives of the agencies had a group plogging activity in Ahamdo Coast Park in Incheon as an opener of the nationwide EnviRun Campaign after the event.

On the same day, SK Innovation Ulsan Complex (hereafter, Ulsan CLX) also hosted a launching ceremony of the joint plogging activity with local government agencies in the Ulsan region and volunteer organizations. Ulsan CLX donated KRW 50 million to Ulsan Volunteer Center to promote plogging activity and recirculation business. Participants of the launching ceremony had a plogging activities by dividing the areas around the Jangsaengpo Marine Park into four sectors while walking the Culture Exploration Course.

Even though SK Innovation’s 2022 Plogging Week is over, the campaign is expected to continue inside and outside of Korea. SK Innovation’s EnviRun Campaign aims not only to end up as an event to pick up trash but also to get rid of accustomed habits and perceptions that did harm to the environment and create a green lifestyle for the environment and utilization of sustainable resources. EnviRun plogging campaign will expand to not just a corporational activity but a global campaign that the public from local community can also join.