– Proving its position as one of the best petroleum developers with technical excellence in the region, securing a bridgehead for its mid- and long-term business expansion in Malaysia

– Block SK 427 offers good prospects for exploration and has several geological structures where drilling is possible, as well as benefits from infrastructure nearby

■ “We will increase our chance of success in this Malaysian block by exerting our capabilities and technical excellence while accelerating our plan to expand business in Southeast Asia,” said Myeong Seong, CEO of SK Earthon

On April 22 (KST), SK Earthon announced that the company signed the Production Sharing Contract (PSC) with Malaysia’s state-owned oil and gas company Petronas (Petroliam Nasional Berhad) and PSEP (Petroleum Sarawak Exploration and Production Sdn., Bhd.) after winning the bid on Block SK 427, an oil block located off the coast of Sarawak region last year. This is the first time SK Earthon successfully won a bid for the operatorship of an oil block in Malaysia. By securing the mineral rights and operatorship, the company is now ready to start the exploration of Block SK 427 in full swing.

The mineral rights are property rights acquired for exploiting a particular area on land or at sea, authorized by a legitimate procedure, such as winning a bid, for natural resources, such as oil and gas, that the plot harbors. According to the acquisition of the mineral rights, a party that signs the mineral rights contract* with an oil-producing country is referred to as an operator.

SK Earthon officials said, “Winning the bid on Block SK 427 in Malaysia proves that SK Earthon has gained recognition as one of the best petroleum developers and block operators in the region with technical excellence.” “By leveraging the technologies and capabilities that we gained through our experiences in the nearby exploration block in Vietnam, we will maximize the prospects of the Malaysian block that will serve us as a bridgehead for our mid- and long-term business expansion in the Southeast Asian countries.”

Block SK 427 is a shallow-water block off the coast of Sarawak, and it is known as an area that has good exploration prospects as a series of medium- and large-size petroleum resources has been discovered in Sarawak and its surrounding areas. The block also has multiple geological structures* that allow for drilling within the block. Moreover, the area has advantages for the E&P as infrastructure, including a pipeline system already built for exploration blocks nearby which have been operated for oil development.

* Geological structure: The spatial distribution of rocks or strata on the crust

SK Earthon and Petronas share the same aspiration about the need for carbon reduction and look forward to finding opportunities and solutions for Carbon Capture and Storage (CCS) together in the future.

SK Earthon chose the green sector based on the CCS as its new growth engine to execute its Financial Story of “Carbon to Green,” and the company has been discovering opportunities for various business projects inside and outside Korea.

Myeong Seong, CEO of SK Earthon, emphasized, “By exerting our E&P capabilities and differentiated technologies that have been long accumulated, we will increase our chance of success in this Malaysian block while accelerating our plan to expand the business in Malaysia and Southeast Asia.” 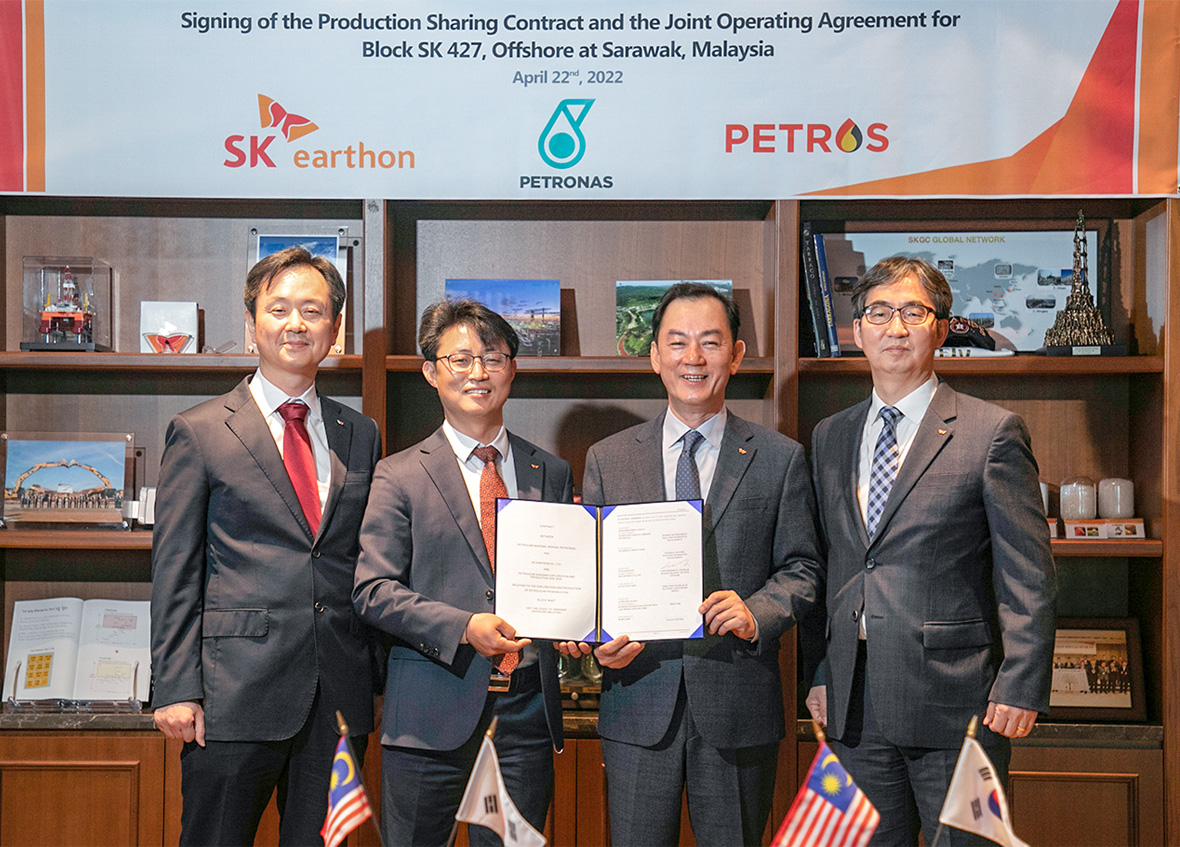