■ Evenly improved performance in all business areas by inventory-related gains of the refining business due to a sharp rise in refining margin and rise in oil prices, etc.

– Through the optimization of the refining business’ facility operation and enhanced profits and losses from trading, accomplished operating profit of KRW 2.2291 trillion.

– The battery business records KRW 1.288 trillion due to the operation of new production plants and increased unit sales price, expecting improved profitability in the second half of the year, driven by new plants’ stabilized production yield.

SK Innovation explained, “Main contribution factors for the enhancement in profits and losses were the improved refining margin due to the rise in the demand of oil products, caused by the instability in global energy supply and COVID-19 endemic, bolstered inventory-related gains due to the increased oil prices, and optimized facility operation.” It added, “In addition, the key contributing factor for the strong performance was a large increase in the export volume of oil products.”

This year, the export of oil products has sharply increased and became the number 2 major export product in the first half of the year, following semiconductors. SK Innovation’s oil product export volume in the first half of the year reached 65 million barrels, the YoY increase by 41.4%. In terms of the Q2 export performance (including the sales of overseas corporations) of SK Innovation’s refining, petrochemical, lubricants, batteries, and battery materials business areas, it accounts for 71% of the entire sales.

For the pre-tax profit, SK Innovation recorded KRW 2.101 trillion as non-operating loss of KRW 319.1 billion occurred by the increased loss related to the higher exchange rate and interest costs from the debt.

The increased purchasing cost for crude oil followed by the rise in the oil prices led to an increase in the net working capital. Moreover, the net debt recorded KRW 10.2839 trillion, which is an increase by KRW 1.871 trillion compared to the end of the last year, due to the facility investment for expanding the battery business.

When breaking down the performance by business area, as there are concerns in the energy supply chain due to the prolonged Russia-Ukraine War and expectation for recovery in demand influenced by the post-COVID-19 economic conditions, the refining business saw the enhanced refining margin, and accomplished the operating profit of KRW 2.2291 trillion, the QoQ increase by KRW 722.4 billion. The optimization of facility operation and improved trading profits and losses also influenced the strong financial result. As there is an ongoing unprecedentedly widening gap in the spread between High Sulfur Fuel Oil (HSFO) and Very Low Sulfur Fuel Oil (VLSFO), the refining business has secured a competitive margin based on the newly installed No.2 VRDS* in 2020.

(*) Vacuum Residue Desulfurization (VRDS): It is a facility to produce light oil and VLSFO by causing hydrodesulfurization by using vacuum residue from the vacuum distillation process as a base material.

The petrochemical business recorded operating profit of KRW 76 billion, the QoQ increase by KRW 44.8 billion. Although the decrease in the naphtha price influenced the profits and losses related to inventory and increased the fixed costs, the spread of para-xylene and aromatic products was improved, and this led to a strong result in the operating profit.

While the lubricants business experienced a small drop in base oil sales compared to the previous quarter, the rise in the selling price of lubricants and the influence of the inventory-related profits and losses drove the business to achieve operating profit of KRW 255.2 billion, the QoQ increase by KRW 43.6 billion.

The E&P business recorded operating profit of KRW 166.2 billion, the QoQ decrease by KRW 32 billion due to the decreased sales volume, and increased operation costs of mining blocks and selling, general, and administrative expenses (SG&A).

Despite the decrease in the sales volume in some areas caused by disruptions in the supply chain for automotive semiconductors, the battery business maintained a growth momentum that it broke the KRW-1-trillion mark in sales for three consecutive quarters as it recorded sales of KRW 1.288 trillion, the QoQ increase by KRW 28.1 billion, backed by the operation of new production plants and increase in the unit cost of sales. Yet, in terms of the operating profit and loss, it recorded KRW 326.6 billion in loss, the small increase caused by the decrease in the sales volume and increased power costs in its European production sites. In the second half of this year, Plant No. 1 in Georgia, the US, and Plant No. 2 in Hungary will have their production yield stabilized. Along with this, the operation of Plant No. 2 in Yancheng, China, will lead the battery business to continue its external growth and expect improved profitability.

The materials business recorded operating loss of KRW 13 billion as there was a QoQ increase by KRW 9.9 billion in loss caused by increased utility costs and operation costs despite the small increase in the sales volume.

Regardless of the performance, SK Innovation has made a steady investment to become a leader in the future green energy market. In the battery/material areas, it invested almost KRW 8 trillion from 2018 to the first quarter of 2022, and it plans to make an investment worth KRW 20 trillion, including the already injected amount, in the battery/material field. Furthermore, it plans to push forward with the battery metal recycle (BMR) business in full swing and start a commercial operation starting from 2025. Especially in the Story Day event last year, SK Innovation revealed its plan to make an investment worth KRW 30 trillion in green businesses in 5 years by 2025.

Besides the battery/material areas, SK Innovation’s investment in green energy, such as hydrogen, SMRs , and waste plastic recycling, is already in place. After establishing comprehensive business cooperation with US-based SMR company, TerraPower, with SK Inc. in May this year, SK Innovation made an investment of USD 30 million (approx. KRW 38 billion) in Amogy, the US company producing fuel cell systems out of ammonia, last month, and the company continues to expand its investment in the future green energy industry.

In the future, based on secured investment resources by the improved market conditions, SK Innovation plans to discover future energy businesses, such as hydrogen, energy solutions, and start-ups in the industry, and expand its investment. Through this, the company is taking the lead in establishing a more stable green energy supply chain as a Green Energy and Materials Company.

Kim Yang-seob, Head of Finance Division Group of SK Innovation, said, “SK Innovation actively engages and pushes forward with developing green portfolio centered on low-carbonㆍcarbon-free energy, and circular economy for securing a growth engine related to future energy amid the rapidly changing management environment.” He added, “With our goal to achieve Net Zero, we will transform into a green energy and materials company.” 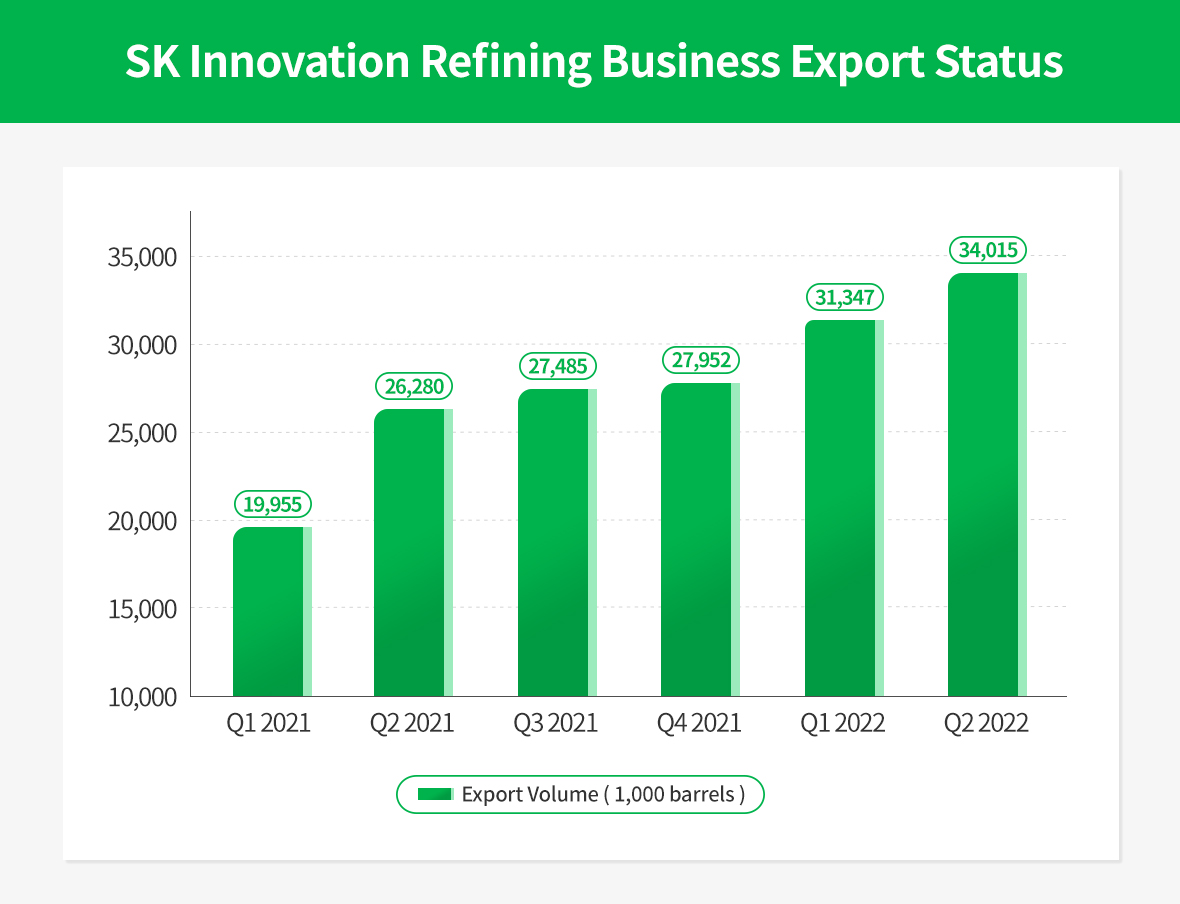