■ SK Innovation and Amogy agree that ammonia is a sustainable choice to cut carbon emissions, and they will cooperate on developing decarbonization technologies.

SK Innovation announced that it plans to invest USD 30 million in Amogy, the US company that produces fuel cell systems out of ammonia. SK Innovation and Amogy held a signing ceremony on June 12 (local time) in San Jose, California, the United States, wherein they agreed to cooperate on developing the ammonia-powered fuel cell system technology and expanding the market. The ceremony was attended by Kim Jun, Vice Chairman of SK Innovation, Kim Cheol-jung, Head of Portfolio Divisional Group, Lee Seong-jun, Head of Institute of Environmental Science & Technology, and Woo Seong-hoon, CEO of Amogy.

Amogy was founded last 2020 by Massachusetts Institute of Technology (MIT) Ph.D. graduates, and they are leading the R&D and management of the company. Currently, major companies, such as Amazon and AP Ventures, are stockholders of the company. Its primary research focuses on using ammonia to produce a small fuel cell system that can be used in commercial transportation such as tractors and drones. They are now expanding their technology to be applied to bigger transportations such as 18-wheel tractor trailer as well as an ocean cargo ship, since global transportation is a sector which curresntly accounts for an estimated 17% of greenhouse gas emissions.

Amogy has completed the verification test of its product on 5kW drones and 100kW tractors. And by next year, it plans to apply the technology to large commercial transports such as trucks and ships. Its future plan is to develop a single 500kW ammonia-powered fuel cell system and make it modular to come up with a system that can generate the power of 5MW. With that power, it can be used for 1,000-ton ships.

SK Innovation’s decision to invest in the company came after its understanding that ammonia could be the key to vitalizing the eco-friendly hydrogen economy. Countries all across the world are actively developing hydrogen fuel cell technology, which produces electricity by injecting hydrogen as fuel. However, the biggest hurdle in the development is proving the efficiency behind storing and transporting the actual hydrogen in the cryogenic form of liquefaction (minus 235 degrees Celsius / minus 423 degrees Fahrenheit) from one place to another.

Ammonia has become a potential solution to this problem. Since ammonia is a compound of hydrogen and nitrogen, a separate extraction of hydrogen allows it to be used as a fuel that produces electric energy. As its liquefaction point for storage and transportation is minus 33 degrees Celsius (minus 27 degrees Fahrenheit), which is way higher than hydrogen, this allows for decreased energy consumption and carbon emission.

In the case of transporting a kilogram of hydrogen from Australia to South Korea, the cost of transportation for liquefied hydrogen is USD 3.4, whereas it is USD 1.7 for liquefied ammonia. Another advantage is that the liquefied ammonia can save more hydrogen in the same space than liquefied hydrogen. Last 2017, the annual production of ammonia reached 180 million tons across the world, and the international shipping size reached 18 million tons, which means that the distribution infrastructure for ammonia is in place.

SK Innovation believes that Amogy’s technology has a high chance of commercialization in the market. The fuel cell system Amogy creates out of ammonia is a miniaturized integrated system composed of an ammonia tank, ammonia reformer (extracting hydrogen), and hydrogen fuel cell. Given its high-power system, the company can reasonably expect to apply its technology to large commercial transportations, such as cargo ships and trucks, and the recently rising green mobility market, such as carbon-free agricultural machines, forklifts, and drones.

Kim Cheol-jung, Head of Portfolio Divisional Group, said, “It’s the first fruit, a combination between SK Innovation’s Carbon to Green Strategy and Amogy’s unique technology. The success in the project will ensure the active development and usage of carbon-free and low-carbon energy, and we will continue to build the eco-friendly business portfolio in the process.”

Woo Seong-hoon, CEO of Amogy, said, “Reducing carbon in the field of large transportations is imperative to achieve Net Zero by the mid-21st century. Ammonia is rich in nature and can be easily acquired, making it a viable choice for sustainable carbon reduction. We will strive to eliminate greenhouse gas and to develop technologies that help companies to decarbonize.”

SK Innovation is actively working hard in seeking new businesses to build its green portfolio. Kim Jun, Vice Chairman of SK Innovation, revealed in a global forum held in the United States that the company will acquire and commercialize technologies for carbon-free and low-carbon energy, build portfolios, and cultivate corporate values.

Amogy offers ammonia-based, emission-free, high energy-density power solutions to decarbonize transportation for a sustainable future. Founded in 2020 by four MIT PhD alumni with a shared vision, Amogy aims to enable the decarbonization of the heavy-duty transportation sector, accelerating the global journey towards Net Zero 2050. The company has been invested in by Amazon’s Climate Pledge Fund, AP Ventures, DCVC, Newlab, SK Innovation and Saudi Aramco Energy Ventures. To date, Amogy’s scalable ammonia-powered, zero-emissions energy system has been demonstrated with success in a drone and heavy-duty tractor. More info at: www.amogy.co. 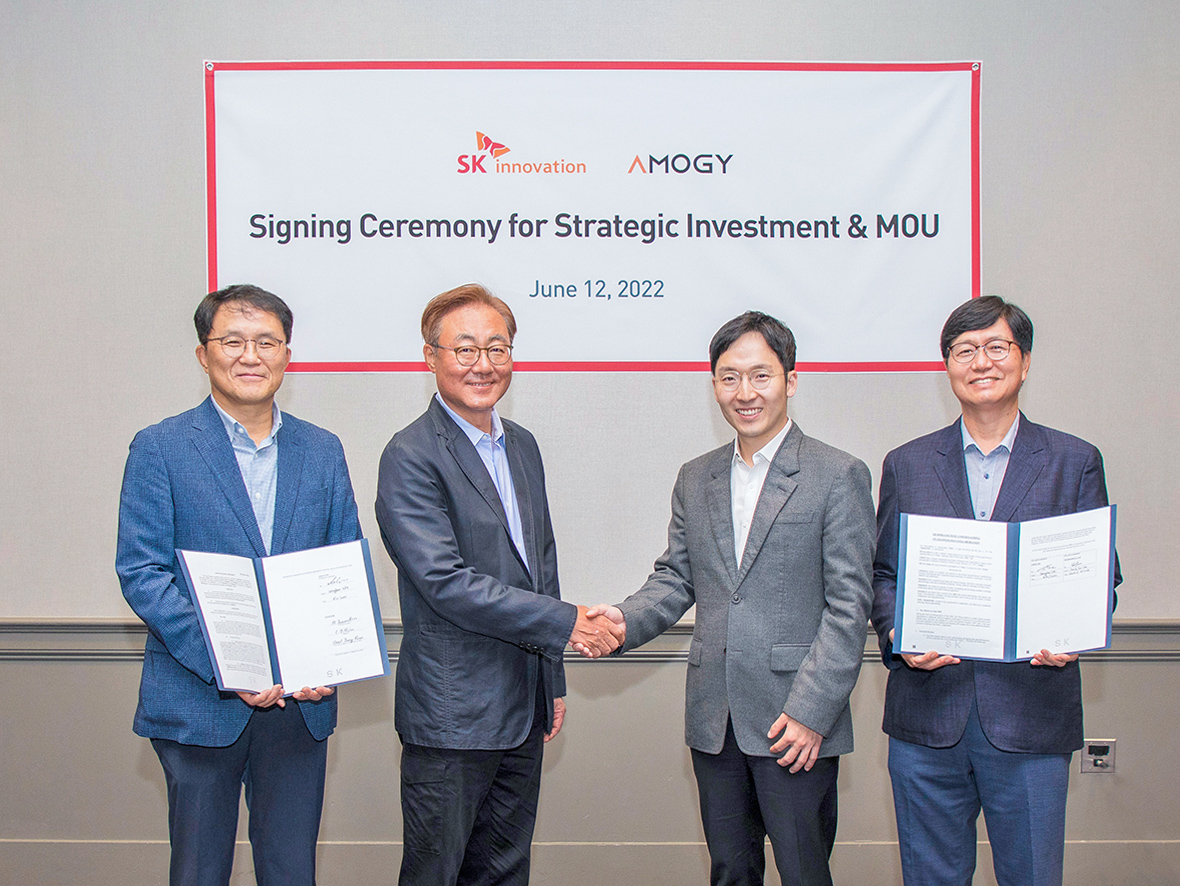 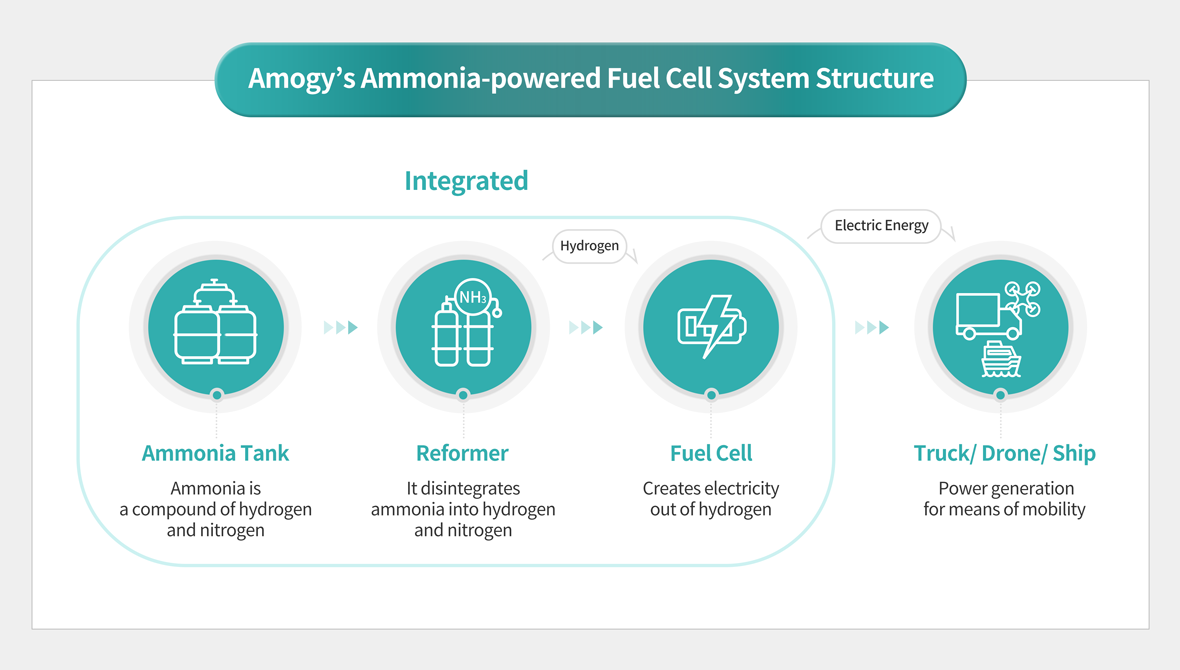 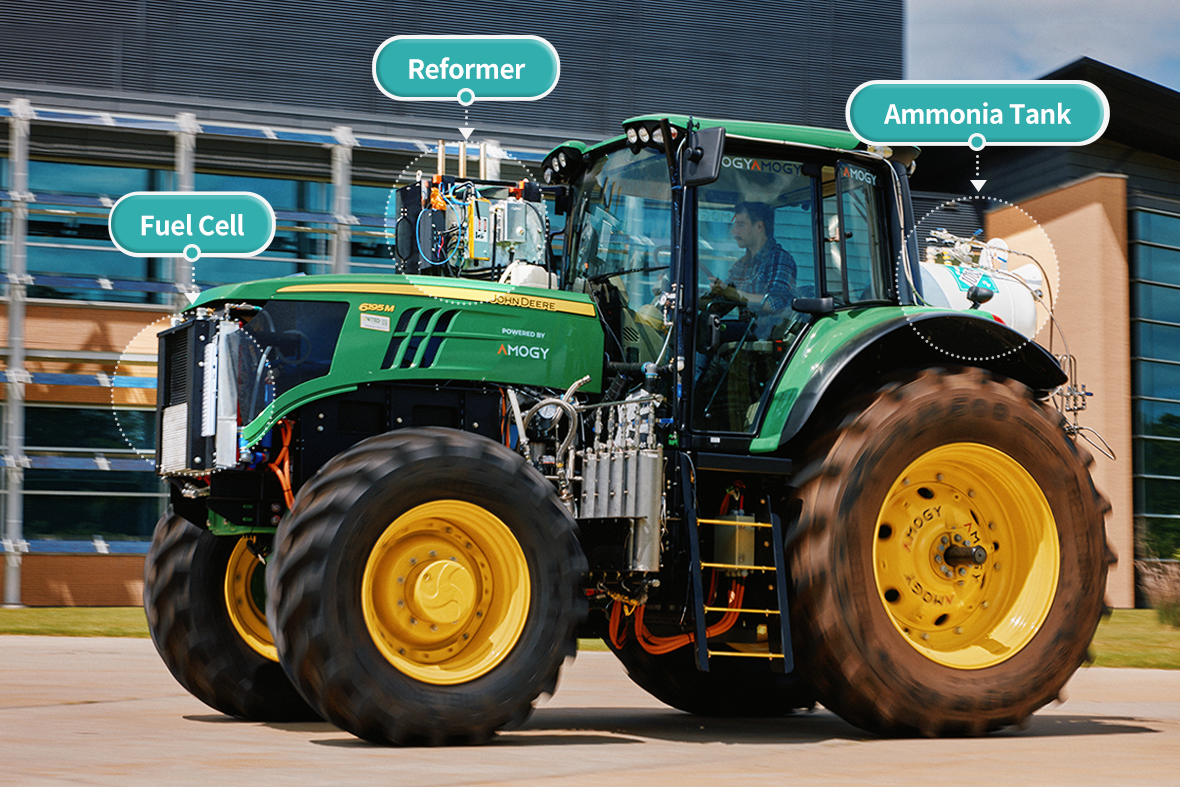